Hi, my name is Dennis Michels and welcome to my new blog series called Zero Tolerance, in which I discuss anything Rule 0 related. I might be stressing the definition of Rule 0 here and there with fan-created cards, proxies, un-cards and whatever else is usually not allowed. My intent is not to break the format with overly powerful decks. I just like to change things up a bit here and there while hopefully bringing something enjoyable to the table. With this series I hope to enthuse more people to explore new ideas and bring back the fun to casual Magic.

Now, for the inaugural episode I was actually planning something else entirely, but this just popped on my radar and I had to share it with you! It’s a website called mtg-spark, which features a fantastic fan-designed new mechanic around Planeswalkers and their loyalty.

The mechanic is called Spark, and it lets you pay loyalty counters to cast spells or activate abilities on non-planeswalker card. It has variations that are tied to specific Planeswalkers, or to specific colors or are just open to use by any one planeswalker you want. Some Spark abilities even let you plus your planeswalker’s loyalty. 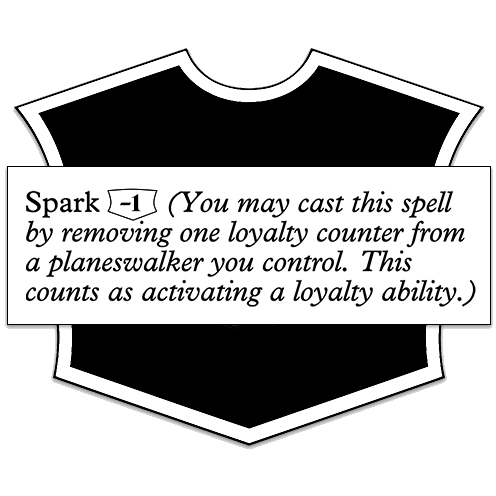 The journey behind the Spark mechanic is an awesome one, designed by Guybrush Taylor and, as he puts it himself, the gang at r/custommagic. When asked about the story behind the development of the mechanic, Guybrush delivers a detailed recollection of his design journey of which the short version is that Spark went through six rounds of revisions. Each round tried to capture the successes and solve the problems of the previous round, while exploring new card ideas for the mechanic along the way. The first iteration focused on the core idea: loyalty as a resource. Spells that required loyalty to cast, but were quite powerful in exchange. Planar Mox and Planar Lotus started the whole adventure. The mechanic actually got increasingly more problematic as it was developed, and it was only by going through the prior conversations and exploring and combining all the ideas raised that the final form was realized in which there were still some things left to correct, such as removing the “Spark” subtype (it was meant to act like Tribal, so you could search for Spark spells). And Guybrush continues working on the mechanic by combining it with other mechanics (such as the Meld cards on the site). There’s also a few ideas from the group that aren’t on the site yet, but soon will be.

I personally am looking forward to the upcoming new cards and am inspired to build a rule-0 Oathbreaker deck using the Sarkhan meld card as the Commander!