Each of these board games focuses on a world which is in desperate need of protection, cyberware and technological advancement. Some of the games are about protecting one person against the forces of nature from an unseen enemy and are focused upon technology. Some that have cyberpunk themes are more oriented towards cyber war and futuristic cyberpunk aesthetics and themes.

€49.99
Shadow of the Beanstalk is a 256-page sourcebook for use with the Genesys Roleplaying System. In this book, you’ll find new rules for character creation, new weapons, equipment, and adversaries, new rules for running the net, a guide to New Angeles, and advice for Game Masters running a campaign in the cyberpunk future of Android. Even better, all of this comes accompanied by beautiful art and elegant mechanics that can be used in any science-fiction setting for the Genesys Roleplaying System.
Buy this game

€69.99
In New Angeles, you gain control of one of these mega corporations, then you use your wealth and influence to create more wealth and more influence. To do this, you cut deals and forge temporary alliances. You leverage your credits and assets to gain financial superiority over your corporate rivals. All the while, you also need to keep an eye toward the masses, striking deals with the other corps as necessary in order to keep a lid on crime, disease, and unrest. If you want to maximize your profit, you need to keep New Angeles open for business!
Buy this game

€39.99
Most of the generic programs write pathways between Titan’s various nodes, allowing you to place a blue partition between the nodes on the board. Whenever your partitions seal off a section of the board containing only your access point or access points, they are “secured” and flipped face down. They are no longer vulnerable to your opponents’ programs, and you will score the accounts they control at the end of the game.
Buy this game

€59.99
It happened without warning, out of a clear evening sky. The neons of New Angeles were flickering to life, as an equatorial twilight speed across the city. Events progressed broken and disordered. A strobing light directly overhead, like a drive flame where no ship should be. A rain of carbon shards shattering windows and downing hoppers in Manta, molten and twisted into tortured forms. Cayambe rung with a bone shaking vibration, as if someone had capriciously plucked a planet sized guitar.
Buy this game

Shadowrun: Crossfire is a cooperative deck-building card game for two to four players set in the gritty, cyberpunk fantasy world of Shadowrun. Play a shadowrunner team and take on tough jobs such as protecting a client who’s marked for death, shooting your way out of downtown when a run goes sour, or facing down a dragon. In each game you’ll improve your deck with a mix of strategies, while earning Karma to give your character cyber upgrades, physical augmentations, magical initiations, weapons training and Edge.

Kickstarter Cyberpunk Board- and Cardgames 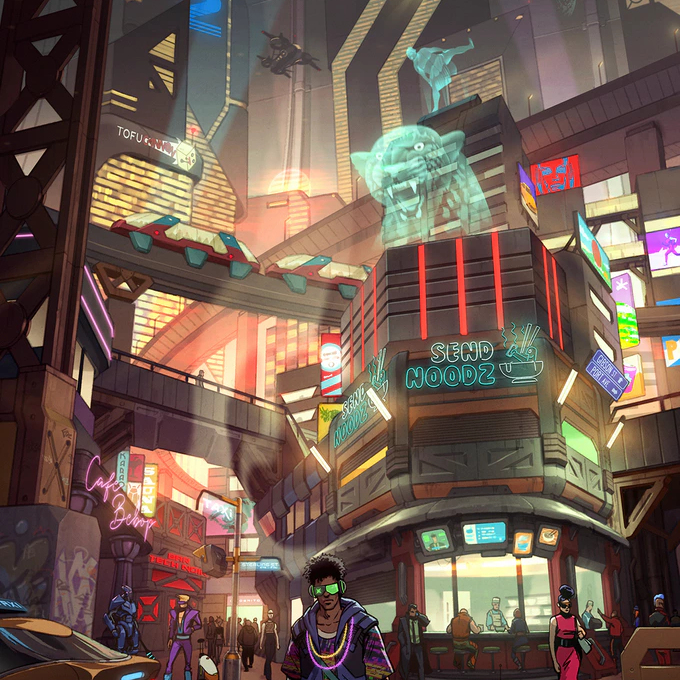 Hard Wired Island is a cyberpunk tabletop RPG with a retrofuture aesthetic, inspired by 90s media like Ghost in the Shell, Policenauts, Bubblegum Crisis, and Cowboy Bebop.

It’s set on Grand Cross, a space station in crisis. Corporations are corrupting it into an authoritarian monument to greed. Long-time residents are being pushed out of their neighbourhoods as the wealthy expand their territory. In the shadows cast by the corporations lurk criminal gangs, hate groups, and rogue robots.

Whether you’re engaging in street activism, getting dragged into corporate schemes, or fighting the corporations and their minions directly, your goal is to steer the station towards a better future before it’s too late. 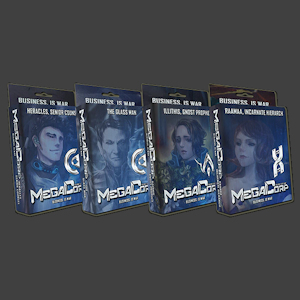 Megacorp is a card game about business, set in the dark, cyberpunk post-capitalist era of mankind’s colonization of the galaxy. Most of humanity (The CORP) have been incorporated, made cyborg by nanoblood with shares in their very person traded on the stock market. Others, the INCARNATES have embraced trans-humanism through genetic augmentation and finally the religious GNOST have held on to unspoiled humanity but congregate around psionically empowered shepherds.

Players take the role of corporations controlled by indomitable founders from three factions. Test your commercial acumen and challenge your friends business skills in a fun, dynamic game where assets change hands and the boardroom takes to the battlefield!

By the 23rd century,

corporate entities had taken over after the failure of traditional government. Mankind was faced with massive challenges: overpopulation, epidemics, economic chaos, and climatic change culminating into what seemed to be an inevitable extinction event. The end of mankind was nigh. 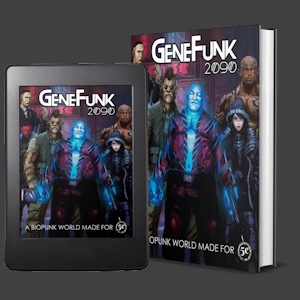 GeneFunk 2090 is a biopunk/cyberpunk RPG and setting made using the D&D 5E Open Gaming License. Players take on the role of elite mercenaries that specialize in investigation and violence. No magic or fantasy, but tons of cybernetics, genetic enhancements, nanobots, drones, hacking, androids, high tech guns and armor, and other amazing tech!

Cadre of Professionals.  You and your allies are a cadre, a lean start-up corporation that specializes in investigation, intelligence, protection, and violence. To keep their hands clean, the syndicates often outsource this kind of work to smaller outfits, like yours. Your cadre’s skillset is in high demand in this intrigue filled world, being sought after by megacorporations, nation-states, organized crime, or wealthy individuals. As an autonomous entity, your cadre of elite agents takes contracts as you see fit, navigating the shadows of corporate espionage and savagery with competence and panache. Discreet. Elite. Disposable. 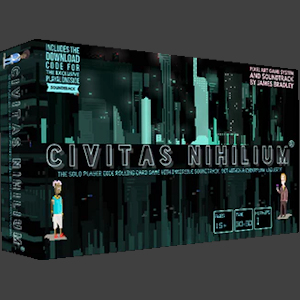 In the world of Civitas Nihilium, the entire globe is slave to an idea: a policy that has changed the way people live their lives, it is called “The Civitas Idea”.

In this dimension ‘The Civitas Idea’ is gripping the world with its strongest grasp. Cities are making ridiculous claims to lure new patriots into town, and this is having a massive impact in the public sector, especially within the police department of Civitas Nihilium.

Witness protection agencies, lobbyists and powerful factions are all trying their nervous hand in attempting to control what is reported to the outside world.

An immersive game that’s different every time, with hundreds of characters, sprawling out across a city packed with an eccentric population & an enigmatic cultural structure.