Here’s a press release we received from the MetaZoo guys!

MetaZoo Games is proud to announce it is once again collaborating with world-renowned, award winning DJ and music producer Steve Aoki on another new MetaZoo expansion set. 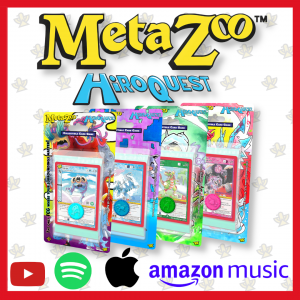 Earlier this year, MetaZoo and Aoki teamed up for the release of HiROQUEST: Genesis, an art-medium blending album combining Aoki’s music with a self-contained story, taking place within the established world of MetaZoo. It follows the main character Hiro, a caster living in the far future of the MetaZoo world, on an introspective journey to save the world. The main character Hiro exists as a dramatization of Aoki himself. Each HiROQUEST: GENESIS CD sold came with one MetaZoo trading card from the new MetaZoo: HiROQUEST set.

This time around MetaZoo Games and Aoki will be working with the Spotify streaming service; not only with music distribution, but with trading cards as well. On November 11, four different variations of MetaZoo: HiROQUEST: Genesis Remixed packs will be released, including one stamped with the Spotify logo. Each card will be stamped as well, showing the Spotify logo, along with a QR code to HiROQUEST: Genesis Remixed on its respective streaming service.

MetaZoo Games and Steve Aoki will announce the three other streaming services they will work with on this project later this week.

From the image I received with the press release, my guess for the other 3 streaming services will be: YouTube, Apple and Amazon Music …