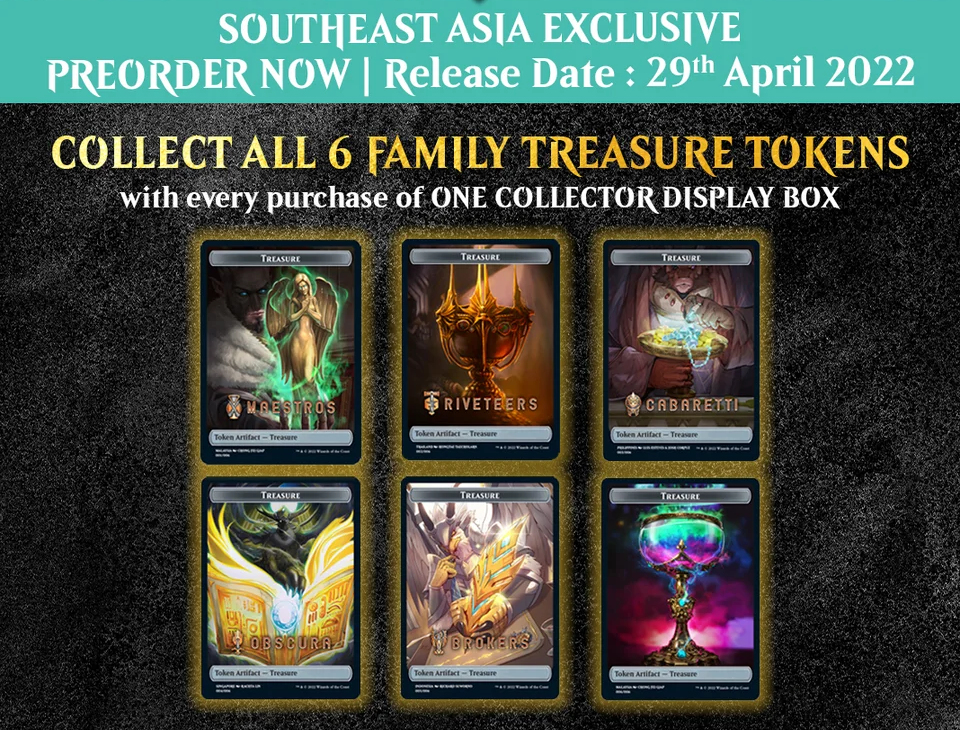 Is Breya a planeswalker?

Bluntly put, No, Breya is not a Planeswalker. She is, however, a very powerful being on the plane of Alara where she managed to enhance her body with a powerful new type of Etherium granting her enhanced capabilities and wild magical powers.

Then why is she in New Capenna?

I do not believe these 2 to be in New Capenna though, but rather it’s just digital sleeves connected to an upcoming New Capenna style Secret Lair featuring 4-color (commander?) cards. To be honest, I do not think a new Preator will even be in New Capenna. I think WotC will wait a bit before featuring more Preators. 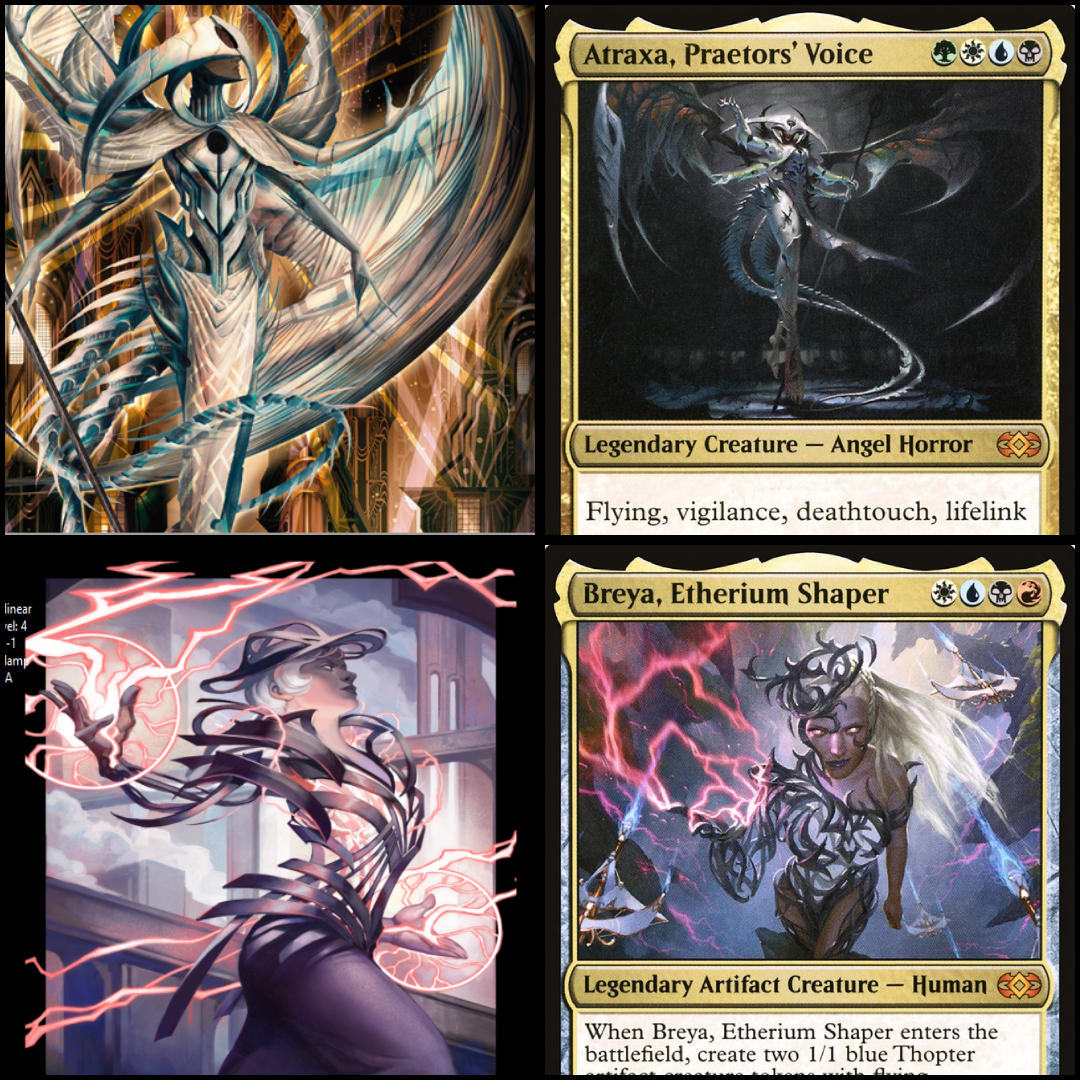 Update 03-03-2022: Edit: They are not replacing the extra thick card, the description of the card has just changed from previous products. Were they first described as Specialty Card, they are now called foil etched card. The refular facecard is also still present

It looks like Wizards is abandoning the extra thick commander face cards, and replacing them with a Collector Booster sample pack judging by the contents description released by distributor today. The thic cards have always been described as specialty cards in the commander deck descriptions, the specialty card is now missing. It seems like the regular foil facecard has been replaced with a regular etched foil facecard.

Also 5 decks in this display, in contrast to the usual 4! I guess these will correspond to the 5 Families from New Capenna. 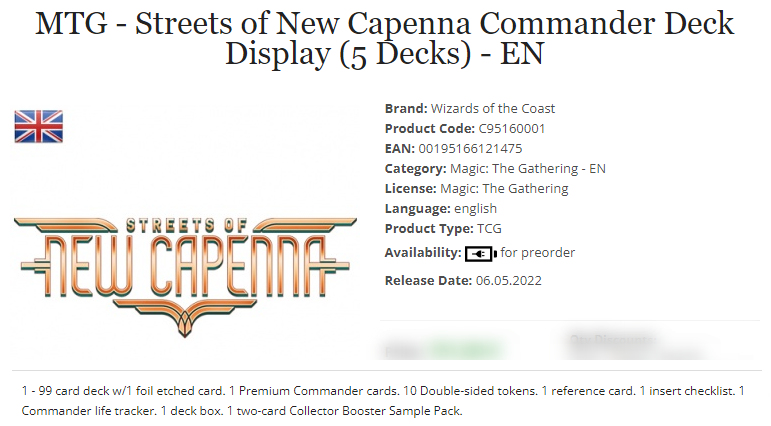 Each New Capenna family has it’s own 3-color combination as follows:

Update 27-02-2022: Some of the Streets of New Capenna packaging and an art card leaked giving a little taste of what’s to expect in this upcoming Art-Deco and Mobster themed set. 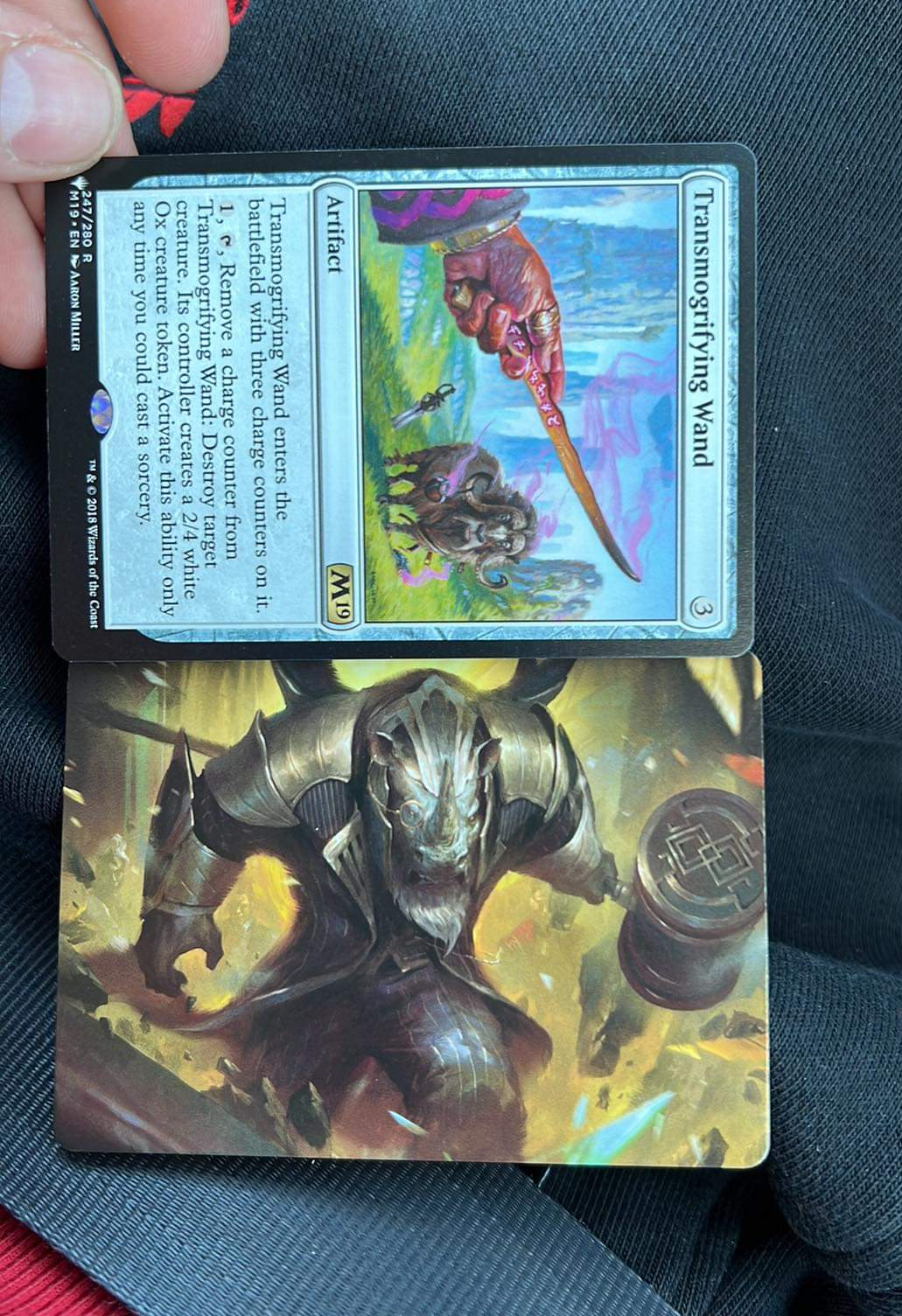 The art card depicts a Rhox-like creature wielding an art-deco decorated Hammer, while wearing a monocle and pinstriped pants.

Furthermore we see a spindown die alongside the packaging showing us the set symbol.

Of note is the depiction of what appears to be an actual car on the packaging of the bundle!

Finally we see Ob-Nixilis on the packaging of the Draft Pack, which is actually no new information since we already knew the presence of Ob-Nix on New Capenna. 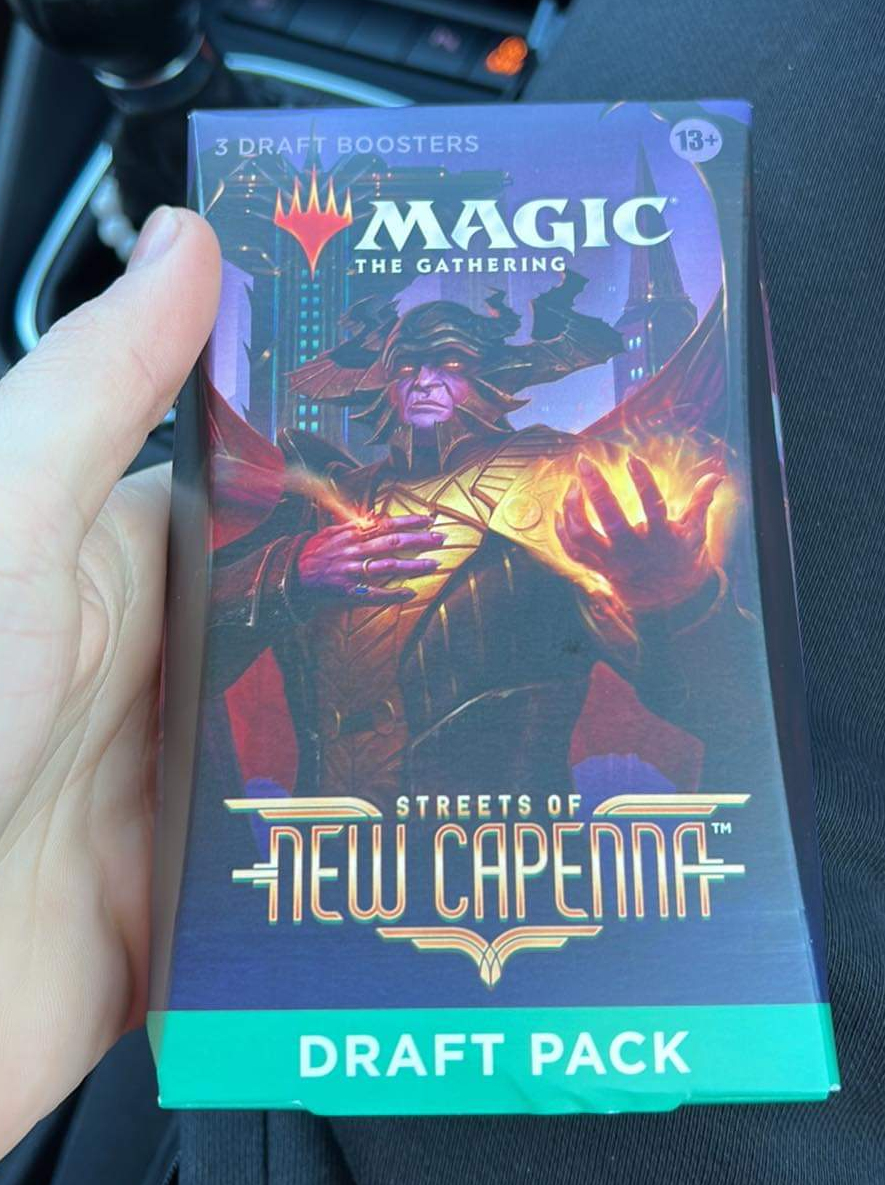 Update 26-02-2022: Wizards announced the release date today. The release date for Streets of New Capenna is set to April 29 2022. Prerelease will be held on the 22nd, while the digital release for Arena will take place on April 28th. WotC releasing paper ahead of digital is a grand victory for LGS’s if you ask me

17-02-2022: Today Wizards of the Coast announced a whole heap of new Secret Lairs. One of which being the Ukiyo-E Hidewaway Lands. These lands have an updated rules text for the Hideaway mechanic. Most notably is the addition of a number behind the mechanic, which opens the gates to more or less cards to choose from and hide away. Another thing of note is the “comes into play tapped” is not in the reminder text anymore, which means it is no longer part of the Hideaway keyword ability.

This updating of the rules surrounding Hideaway and a hideaway making perfect sense in a mobster setting, immediately led to the speculation of Hideaway being one of the mechanics being featured in the Streets of New Capenna set. New Capenna is set in a noir-type world with a heavy mobster theme and art-deco like aesthetics, and is slated for release in March 2022 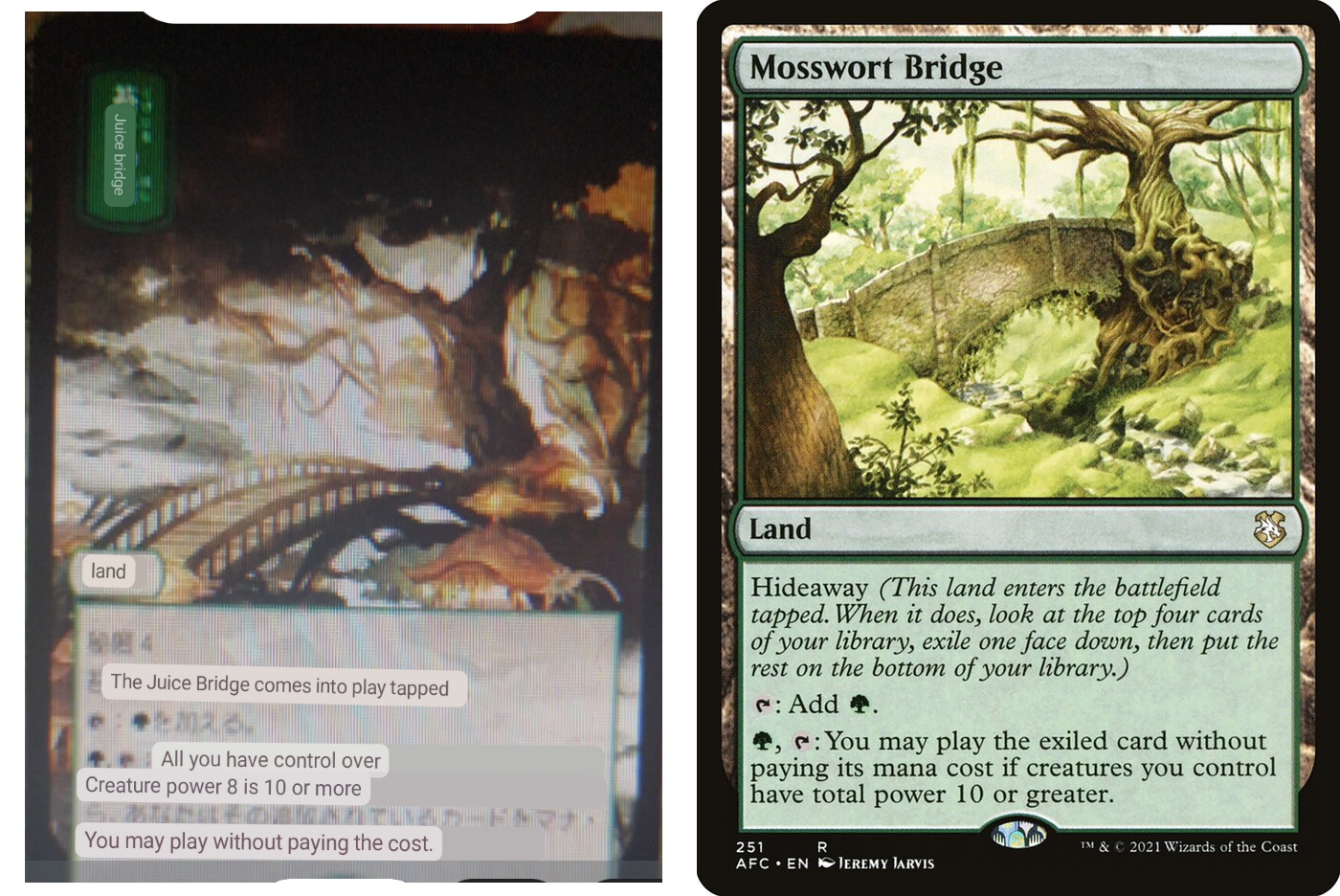 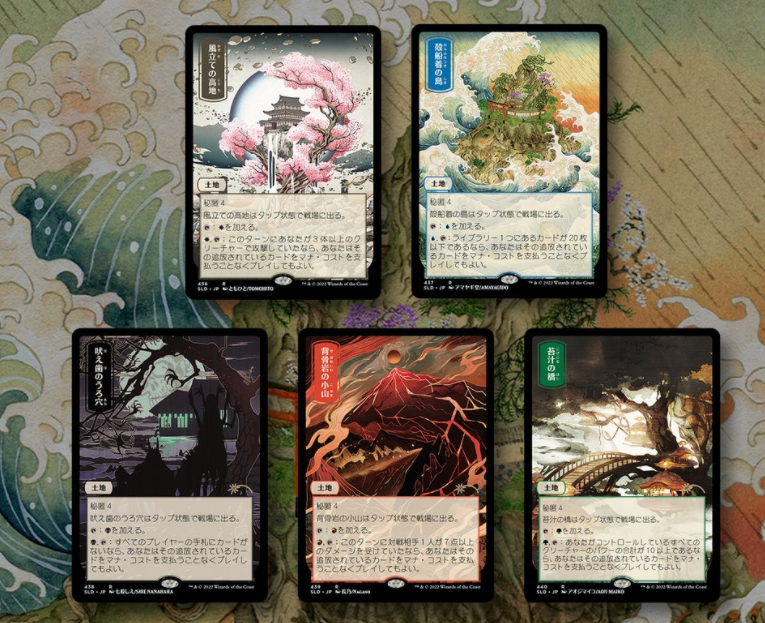