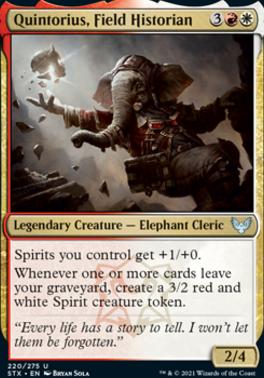 According to a deleted Reddit post we will be digging deep into the core of Ixalan on the next return to that plane where we will be meeting freshly-sparked Quintorius Kand from the Strixhaven school of Lorehold. Which honestly makes sense to me, since he’s a field historian he would probably love digging into the heart of Ixalan to learn more about its history. According to the leak we will also be meeting Huatli again in this set. With Quintorius being Boros aligned, and Huatli also having been depicted as Boros aligned, I do have my doubt this will actually happen since WotC does not typically put 2 Planeswalkers in a set with the same color-alignments. The both of the could ofcourse be colour-shifted, Huatli has already been printed as Selesnya aligned.

Coincidentally a few days before this leak, another post was briefly up on r/mtgrumors with some predictions on the 2023 product line-up, and it also mentioned a Return to Ixalan. The post has been deleted, but I do have a transcription of the contents:

possible leaks for next year’s sets

Source: judges, friends and acquaintances with Wizard employees. However, pinch of salt as always.

I thought perhaps it’d be interesting to see reactions/discussion to the “news.”

Could this all be true, or are we just reading some guy’s wishful thinkings? I do not know, but honestly, a Return to Ixalan sounds plausible to me.

Will we ever visit Muraganda in an MTG set?