Update 09-07-2022:  Many more details have been released, such as the new location cards and also the official rules for the new Customizable keyword!

Some interesting notes from the backside of the box:

Update 30-06-2022: Lots of news today. The official announcement by FFG is released, and together with it a bunch of new cards spoiled!

Update 27-06-2022: 2 more cards have been spoiled for the upcoming Scarlet Keys expansion

Update 25-06-2022: 2 cards have been spoiled for the upcoming Scarlet Keys expansion

Happy solstice, northern hemisphere dwellers! A quick heads up to keep an eye on this space as well as those of our friends over at Drawn to the Flame and PlayingBoardGames for details on some of what the Scarlet Keys has in store for us.

Be sure to check out their channels and subscribe so you can catch the news as is comes down.

Drawn to the Flame: https://drawntotheflame.podbean.com/

Update 22-05-2022: We get to meet a new investigator from the Scarlet Keys expansion! Here’s Charlie Kane – The Politician, see further in this article for some background information on this character. Aside from Charlie, we also get introduced to his loyal assistant named Bonnie Walsh.

Of further interest, the set icon looks to be a grappling hook. Charlie’s card is number 18 which means the other 5 investigators will have 17 cards in between them. Since each investigator usually takes 3 cards (investigator, signature card, signature weakness), that leaves us with 2 extra. What’s that about? The next expansions for #ArkhamHorror: The Card Game are…. The Scarlet Keys!

Stay tuned for more on the Investigator and Campaign expansions early this summer. 🔍🗝 pic.twitter.com/qiHkDge3yc

Now finally, fan favourite from Eldritch Horror Charlie Kane, will be joining the fray. Charlie’s thing in Eldritch Horror was his buying skills in the shop. Stuff he bought could be shipped immediately to anywhere in the world. How and if this will translate to an Arkham Horror investigator skill is yet to be seen.

In this preview image, which is art from the Campaign Expansion box, we see one of the new investigators with Ece Sahin fleeing what looks like Constantinople (nowadays known as Istanbul). On the left we see the Red Gloved Man, pulling out a knife in what appears to be an attempt to intercept the fugitives. 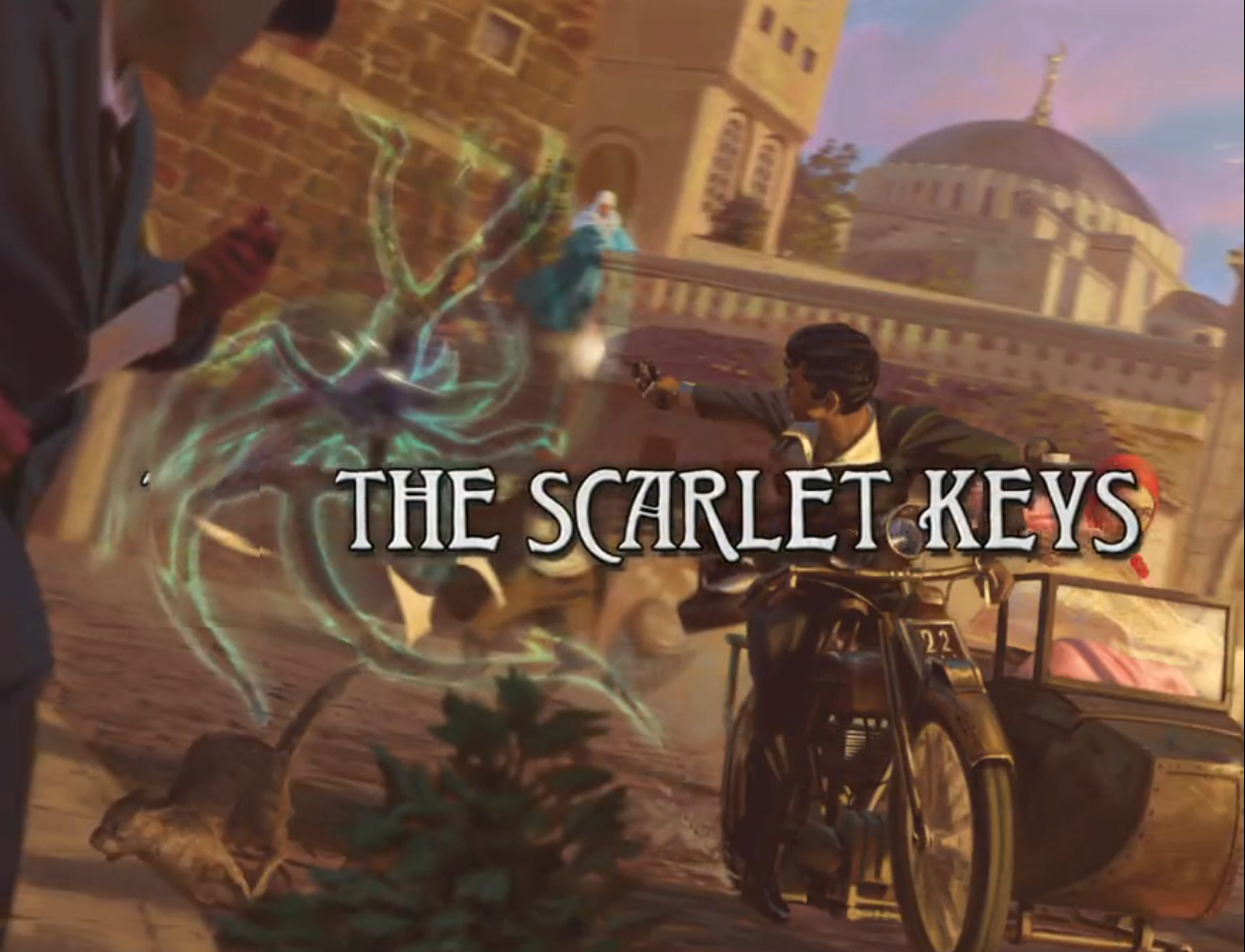 There’s been a series of teaser images posted on the FFG socials the past weeks, we have collected them for you in this gallery:

Thanks to a slip-up in a product sheet by FFG, we got a peek at an upcoming expansion for the Arkham Horror LCG called The Scarlet Keys. Ofcourse plenty of speculation has already been going on about what this expansion will hold. But first let me state that despite there is only an Investigator expansion listed on this sheet, there will absolutely 100% also be a Campaign Box 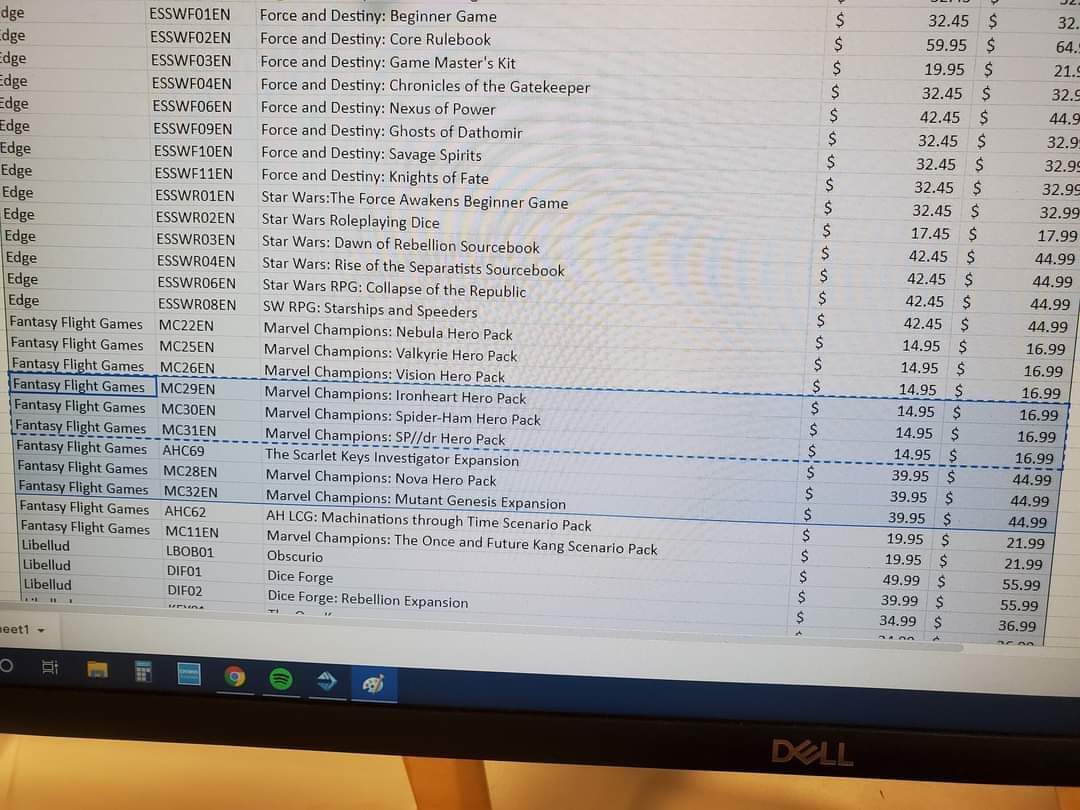 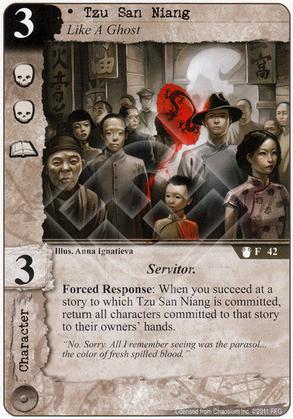 So, let’s talk a bit about the rumors for this leak. It is called The Scarlet Keys and will probably feature the Congress of the Keys, which has already popped up before on this card. 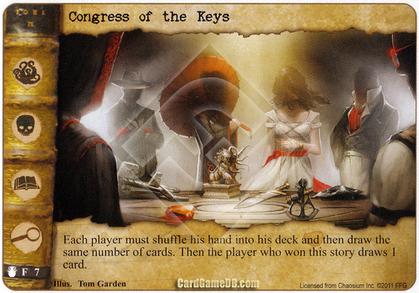 The lady with the red umbrella is said to be Tzu San Niang.

The girl with the red sash around her waist is called Aliki Zoni Uperetria, who also has her own card.

The guy on the left is known as the red gloved man, RGM for short, and is believed to be an aspect of Nyarlathotep. Maybe he is, maybe he’s not, maybe they all are. It is not clear at this point really, so I guess we’ll just have to go wait and see. 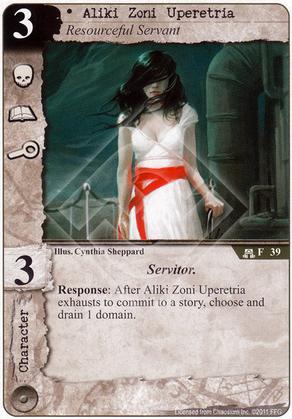 When will Return to the Dream-Eaters be announced?

In what order should I buy the Arkham Horror LCG expansions? – Updated: June 7th 2021

How many back-up Investigators to use in Arkham Horror LCG?